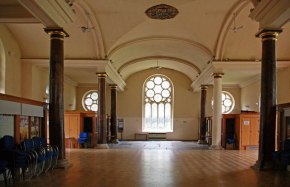 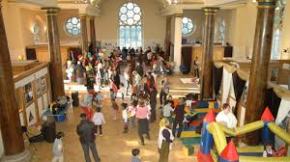 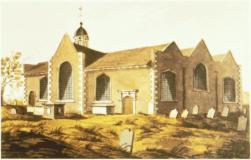 However looks can be deceiving since the Tollington Park building has only been a Catholic church since 1959.

This dissenting-Protestant back-story explains the church building’s interior, which seems to embrace Catholic worship rather reluctantly, although the Catholic congregation here have a genuine affection for the place.

The most obvious changes in converting the building were made at the (liturgical) east end where an altar replaced the large preaching desk (pulpit), and the display pipes of the pipe-organ were replaced by a painted reredos depicting a neo-classical doorway with three windows above; the significance of this decoration is not clear. Sadly I can find no pictures of the interior of the building prior to 1959.

The rather fine and rather large three-manual pipe organ (1920) by the London firm of Alfred Hunter remains in situ, hidden – and rather muted – behind the reredos; its console is at the east end of the south gallery. The instrument was installed as a memorial to those of the New Court congregation who died in the First World War.

I had an opportunity to play the organ during Christmas and New Year 2015-16 when it was abundantly clear that the instrument was in a very poor state, short of wind and with much of it unusable and by March 2016 the organ had stopped working altogether. Undeterred, the parish has immediately set in motion imaginative plans for a restoration of Alfred Hunter’s ‘war memorial’ organ, with help from the UK National Lottery.

This week, and for the second time this year, I have travelled to the pre-Saxon Thames-side town of Barking, eight miles east of Westminster and now the civic heart of the London Borough of Barking and Dagenham. My destination was once again the pipe organ of the thirteenth-century parish church of St Margaret of Antioch.

Until the 1850s Barking was home to a thriving port, most notable for supplying London with coal, fish and grain. 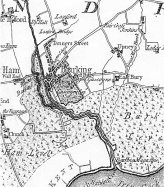 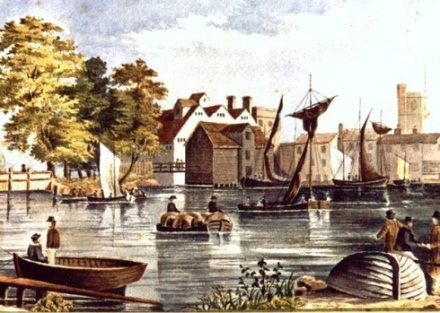 By the early twentieth century the area had become a rather insalubrious hub for chemical-based industries, a major London sewage works, and a coal-fired power station. Such polluting industry is now a thing of the past, and many former industrial sites have made way for much-needed housing.

Before the Dissolution of the English monasteries under Henry VIII, Barking had been the site of a great convent, Barking Abbey, created in the 7th century by Saint Æthelburh and her brother Saint Earconwald. The parish church of St Margaret of Antioch was sited next to the abbey church.

The importance of Barking Abbey can be glimpsed from the fact that its abbesses held precedence over all other abbesses in England, indeed many of Barking’s abbesses were  former queens and the daughters of kings; three are saints. The site of the abbey ruins is now Abbey Green, a public park within which only the Curfew Tower gate to the abbey and the parish church remain intact.

In medieval times pilgrims were attracted to Barking to view the Holy Rood, a painted stone carving of the crucifixion in the Chapel of the Holy Rood inside the abbey’s Curfew Tower, where it survives to this day albeit in a less than pristine conidtion; history has not been kind to it. It is dated to between 1125 and 1150.  According to Vatican records, on 22 March 1400 Pope Boniface IX granted a Papal licence (indult) to the Abbess of Barking “to have Mass and other services celebrated in the Oratory, in which a certain cross is preserved”.

Barking Abbey, the Holy Rood, as seen in modern times

The parish church itself is almost as wide as it is long and is very well maintained. The parish’s current Rector (and Assistant Bishop of Chelmsford) is Trevor Mwambe. previously the Bishop of Botswana whose intellect, spirit and clear-thinking leadership were not so well appreciated in Africa as they are in England. Also visiting the church when I was there was Sir Quett Masire, the 2nd President of Botswana (1980-98). 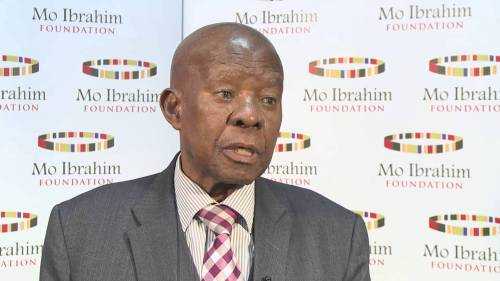 St Margaret’s, Barking, the nave, from north to south

The church’s rather nice pipe organ dates from 1770, and was originally made by the London firm of Byfield and Green. Despite several nineteenth-century alterations and relocations within the building by the firm of J. W. Walker and Sons the organ has retained its original facade (now on the organ’ s west side) and its eighteenth-century sweetness of tone (although not so much of its eighteenth century tone-colour). 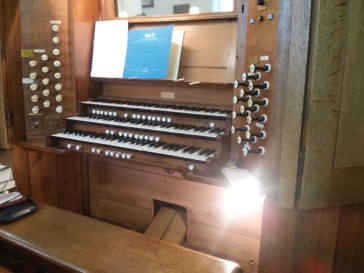 St Margaret’s, Barking, south facade (1913?) in the chancel, north side