Walworth (Saxon: Wealawyr, 1006) and Newington (Niwetun, 1212) were once separate hamlets along the road leading south from London Bridge. In the seventeenth and eighteenth centuries the area was noted for its public gardens and commercial small-holdings, especially those cultivating fruit and flowers. The population of the district was – surprisingly – very little affected by its proximity to London until the early nineteenth century,

Late eighteenth-century and early nineteenth-century maps depict Walworth as a pleasant country neighbourhood with a few newly-formed roads stretching across the gardens and fields. However, the formation of these new roads after 1754 brought an impetus to build well-to-do housing, and in 1808 the Walworth Road was described as being lined with elegant mansions. Between 1800 and 1820  the population of Newington increased from 14,847 to 44,526, although as late as 1853 when the author Harriet Beecher Stowe (1811–96) lived there she found it a “charming retreat” with a view from the windows of sheep and lambs grazing in a meadow. 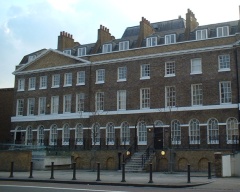 But steadily throughout nineteenth century many of the area’s genteel Georgian-/Regency-era houses were pulled down and replaced by dense blocks of dwellings and three-storey terraced houses. By the end of the centiry the whole area was closely packed with streets of working-class houses, shops and industry. 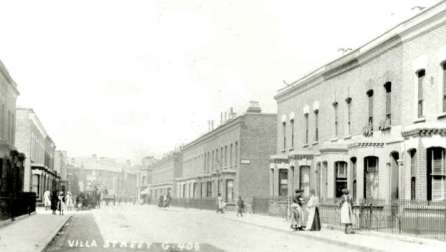 Large-scale post-war public-sector regeneration of housing resulted in the demolition of much of the earlier developments, replacing them with modernist estates of public housing, which in turn are now being replaced by estates of new private sector housing.

A promotional image for ‘Elephant Park” (under construction 2017), which replaces the former public housing once provided by the Aylesbury Estate

In 1820, faced with a rapidly expanding population, the authorities sanctioned the creation of St Peter’s church (opened 1825) to the design of Sir John Soane (1753–1837), his first church, and it remains his most complete surviving church building. The  parish is a thriving community and the building stands in excellent condition. 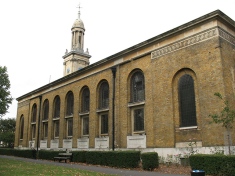 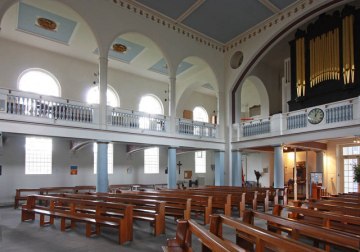 The west-gallery pipe-organ facade and gilded pipes belong to the first instrument (1824/5) installed in the west gallery, made by the London firm of Henry Cephas (H. C.) Lincoln (fl.1810-55). The original organ no longer exists. The current instrument by the firm of Harrison of Durham was moved here in 2010 from the chapel of Whitelands College, Putney, where it had first been installed, in 1949.