The ancient parish of St Mary Newington is located in the London Borough of Southwark on the south bank of the River Thames about a mile from London Bridge. In its original form it was  geographically commensurate with the ancient manor of Walworth. 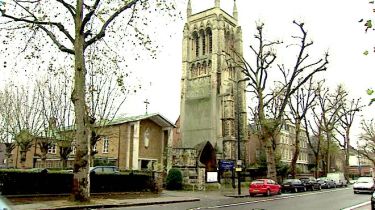 The first known church was located at present-day Newington Butts – where the old churchyard still remains as a public park. Here the tern ‘Butts’ probably refers to the triangle of land between the roads, seen on old maps. We find the term used elsewhere in the area south of central London referring to odd corners of land.

Close-uo detail of the previous and the present-day (2019) location of St Mary Newington church, indicating the locations of the adjacent Roman ‘streets’.

The old churchyard sits close by the junction of two major Roman-era roads leading into London: Stane Street, running  from the Sussex-coast port of Chichester to the City; and Watling Street, running from the Kent-coast ports of of Dover, Richborough, Lympne, and Reculver to Westminster. This junction is now better known as ‘Elephant and Castle’, so named after a tavern that once stood here.

While details of the parish clergy can be traced back as far as 1212 the earliest known mentions of the church building date only from the middle of the sixteenth century. In 1719 ir was described as being:

very small, built of Brick and Boulder […] a double Roof covered with Tile, and the Walls with a rough Cast; the Windows are of a modern Gothick; the Floor is paved with Stone [….] Here are three Iles [aisles], and the Roof is supported with wooden Pillars[…] This Church contains 43 Foot in Length, 54 in Breadth, 22 in Heighth, and the Tower (wherein are five Bells) 44 Foot but to the Top of the Turret near 60 Foot. (John Aubrey: History of Surrey)

Next to the church was a moated rectory. 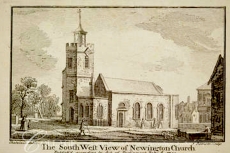 In the early eighteenth century major building work took place to shore-up the church’s crumbling walls. However, by 1779 the building was found to be in such a poor condition that it was entirely rebuilt and enlarged. 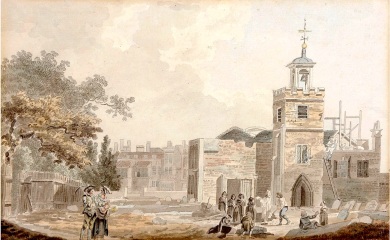 In the early 1870s the decision was taken that this church too should be pulled down, in order to accommodate a road-widening scheme. The old churchyard was retained as a public space. A replacement parish church was put up further south along Stane Street, which by then – as now – was known as Kennington Park Road. Meanwhile back in the old St Mary’s churchyard a clock tower was put up to mark the site of the former church. 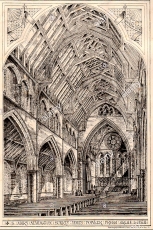 The newly relocated St Mary Newington church was opened in 1876. It was built to the designs of James Fowler (1828–92) in the Early English style.  The roofs of the nave and chancel were of hammer beam construction, the height of the nave from floor to ridge was 70 feet, and its length 100 feet. The 3-manual organ was by the firm of T.C. Lewis.

Following aerial bomb damage during the Second World War Fowlers’s church was pulled down, leaving only a fragment of the west front and the tower. These now serve to frame the street side of a small courtyard in front of the current building. 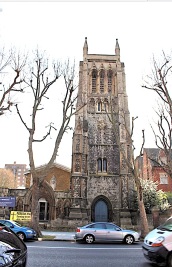 St Mary Newington, London. Looking from the courtyard through the remnant of old west wall towards Kennington Park Road c.2000

The latest church building and fittings (1957-8) were designed by Sir Arthur Llewellyn Smith (1903-78). The church is described as being in a stripped Neo-Classical style built with yellow stock bricks with Portland stone dressings and copper roof. The organ – by the firm of Henry Willis – is in a west gallery, with a detached console in the north transept. Stained glass windows are signed H. Powell. A practical connection with the parish’s long history is kept in the form of silver altar plate, which includes: two silver cups and a paten (1675), a silver flagon (1681), two silver covers (c.1727), and two silver salvers (1783). 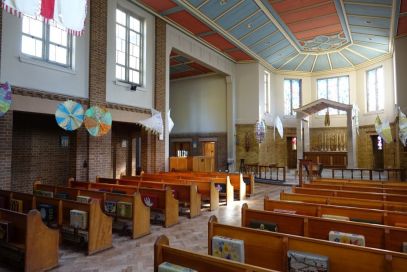 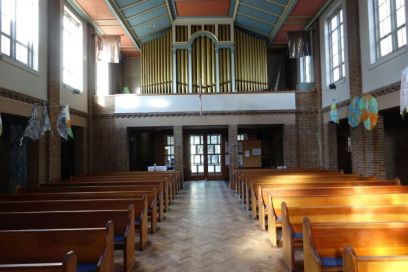