Earlsfield (formerly Garratt Green; var. Garret, Garat &c) – in the London Borough of Wandsworth – is a somewhat nondescript inner south-London suburb. It is dissected by the River Wandle, a tributary of the River Thames. In past times the area was open farmland and with no settlements other than the hamlet of Garratt Green, home to a large water mill. Garratt Lane, running parallel with the Wandle for some distance, is the main thoroughfare of Earlsfield; its name keeps alive a memory of former times.

Sketch map of south-west London showing the location of Earlsfield.

A map showing the course of the River Wandle, running north into the River Thames at Wandsworth

With the coming of the railways in the 1880s the construction of a railway station required the purchase and demolition of a large house called Earlsfield. One of the conditions of its sale was that the station should be named after the house, and so the area has been known ever since. 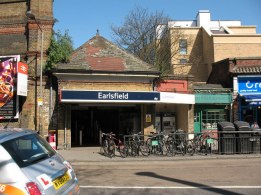 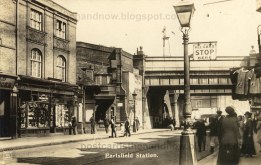 From the mid eighteenth century until the 1820s Garratt Green was widely known for the rumbustious carnival atmosphere that accompanied the election of a ‘mayor’ to oversee the management of the common land. These elections were timed to coincide with national elections, but outgrew their original purpose to become something of rallying point for the un-enfranchised classes to have a day out and mock the political system that denied them a vote. Reports talk of tens of thousands attending.

The scene of the election was the Leather Bottle pub, which still stands on Garratt Lane. The elections were immortalised in a popular drama called  ‘The Mayor of Garratt’ (1763), written by the actor-dranatist and impresario Samuel Foote (1720-77) who had witnessed the 1761 election.

Ephemera of the Garrett elections. 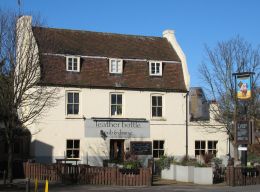 “Sir” Harry Dimsdale, a muffin seller elected as the final Mayor of Garrat in 1796

In the 1920s plans were drawn up to replace the mission building with something altogether more grand, designed by F H. Greenaway and J.E. Newberry, and dedicated to St John the Divine, ‘on a corner site at the junction of Garratt Lane and Bendon Valley’ (The Building News, 29 October 1920), but these plans were never carried out.

Instead we have the rather modest building that dates from 1925 by the architect Arthur Young, 1853-1924, supervised after his death by his business partner Allan Douglas Reid, 1898-1977. (C20 Society Churches Database).

According to an advertisement for a parish organist in The Musical Times of 1943, the organ at that time  was a ‘S Cecilia Organ’. I am guessing that this refers to the  economical production-line instruments made in the early decades of the twentieth century by the firm of Henry Jones in Finsbury Park, north London. 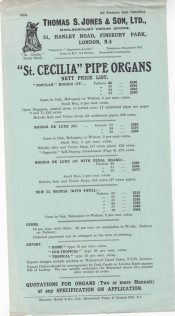 Advertisement for an organist for St John the Divine, Earlsfield in The Musical Times, August 1943

In 1974, according to the National Pipe Organ Register (NPOR), the church had a two-manual instrument but gives no maker’s name. Was this the St Cecilia organ, an enlargement of it, or something altogether different?

NPOR notes that in 1976 a new two-manual and pedal instrument was installed by Percy Daniel and Co. Lrd. of Taunton (Somerset). This instrument was mentioned by name in several quarter page adverts placed by the company in The Musical Times during 1976 and 1977.

Tne organ is sited at the south-west corner of the church, and when I played it earlier this year it was in excellent condition with no extraneous mechanical or wind noise, and was unexpectedly satisfying to play, being well-suited to accompanying the congregation in this small church, and an ideal ‘no frills’ practice instrument. 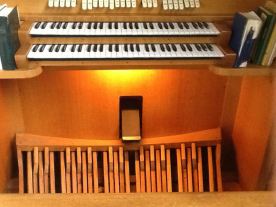