Willesden is an ancient settlement dating back to at least Anglo-Saxon times. It lies approximately five miles north-west of Charing Cross as the crow flies, a little way west from the main A5 road (the Roman ‘Watling Street’) that runs from the capital and on past Willesden. Until the coming of the railway in the 1870s the area remained largely rural and sparsely populated; around 300 residents in 1086 and only 751 in 1801. (British History Online). The area is now densely built up and largely residential with an ethnically diverse population. A crisis food-bank run by the Trussle Trust operates next door to the church, a reflection of the area’s many deep pockets of deprivation.

The location of the church of St Mary Willesden, 5.9 miles north west from Charing Cross,

According to the UK National Archives the story of the parish dates back to at least 937 when Aethelstan (c.894-939) the first king of England defeated the Danes at the battle of Brunanburh (Bamburgh, Northumberland). As a thank-offering Aethelstan gave the royal manors of Willesden-cum-Neasden to St Paul’s Cathedral, whose clergy (Dean and Chapter) still nominate the parish priest at Willesden.

Plan of St Mary’s Church, Willesden, from ‘An Inventory of the Historical Monuments in Middlesex (London: His Majesty’s Stationery Office, 1937)

The church of St Mary Willesden seen from the east (Neasden Lane) c.2015, 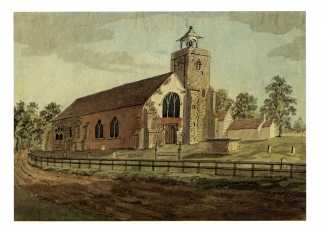 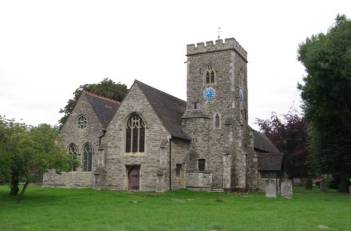 The present-day church building seems to date from the thirteenth century with additions made in the fourteenth, fifteenth, sixteenth and nineteenth centuries. 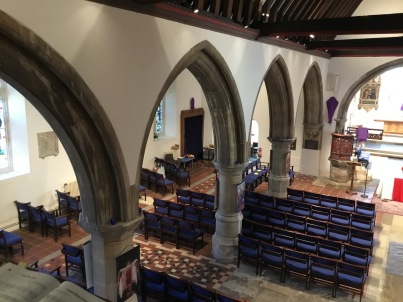 From the late-1400s until the English Reformation period (c.1530 onwards) Willesden church was one of a number of well-known pilgrimage destinations for those seeking succour of the Virgin Mary through prayer before her image, which – at Willesden – was placed in the chancel of the church.

Contrary to the fanciful stories about this shrine that have circulated since the nineteenth century, there is no reliable evidence of: – a curative holy well; – appearances of the Virgin; – miracles, – holy relics; – any description of the shrine itself.  While the relatively few primary sources we have are reliable and clear on the place of Willesden in the devotional life of England, it is entirely unclear how the particular tradition of Marian pilgrimage arose at Willesden, given that images of Our Lady then would have been ubiquitous in every place of worship.

Within the church today there is no architectural evidence to indicate the presence of a medieval shrine, indeed the building seems typical of so many formerly rural Middlesex churches of this age. 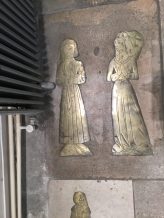 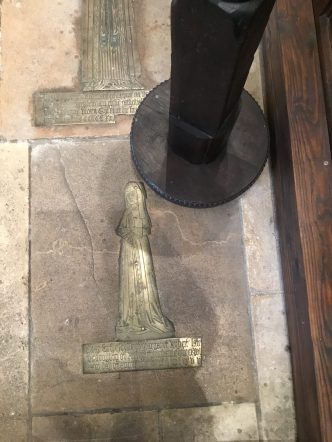 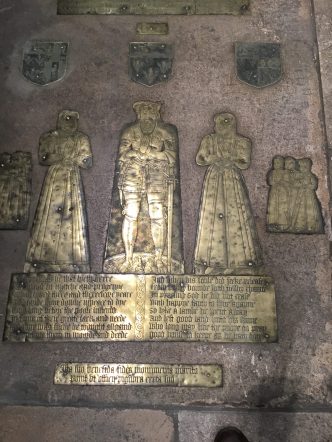 The earliest reliable mention of devotions to Our Lady of Willesden dates from 1502 when Queen Elizabeth (1466–1503), wife of Henry VII (1457–1509), sent money to Willesden and other Marian shrines across England, perhaps to solicit prayers for the impending birth of her seventh child. Also, in February 1503, shortly after the Queen’s death, an allowance of money was paid:

to a man that went on pilgremage to our lady of Willesden by the quenes commaundement. (Valentine, 8) 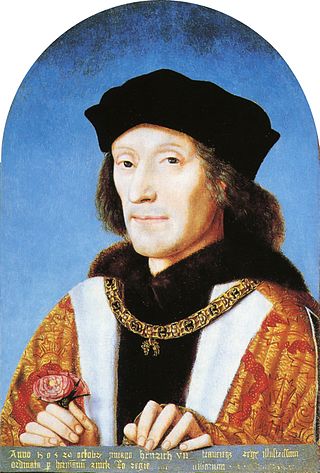 Legal records provide more evidence. In 1509 Elizabeth Sampson of Aldermanbury (London) was accused of insulting the statue of Our Lady of Willesden. In 1521  William Dorset of King’s Langley (Hertfordshire) was accused of stopping his wife from making a pilgrimage to Our Lady of Willesden on the grounds that it was a waste of money (Valentine, 9)

In 1517 William Litchfield (var. Lychfeld, Lichfield &c), Vicar of Willesden and Chancellor of St Paul’s Cathedral died and was buried in the chancel of Willesden church before the image of the Blessed Virgin Mary. Litchfield also gave to the church a gilt chalice, ‘the same to remain to the use of the said Church and the honour of the Blessed Virgin for ever.’ (Wadsworth et al, 12) and this chalice is still in regular use. Litchfield’s memorial brass can be seen in the floor of the chancel.

In 1525 the two youngest daughters of the catholic saint Sir Thomas More (1478–1535) – Elizabeth and  Cecily – were married at Willesden, in a chapel (‘oratorio’) at the house of the MP Sir Giles Alington (1499-1586), Alington was the second husband (m.1524) of More’s step-daughter Alice Elrington (nee Middleton, d. before 1564). The house and chapel were 2.5 miles from Willesden church at West Twyford;  property that came to Alington on his martiage to Alice, it having been the property of Alice’s first husband Thomas  Elrington (d.1523). (Places in Brent, 1) 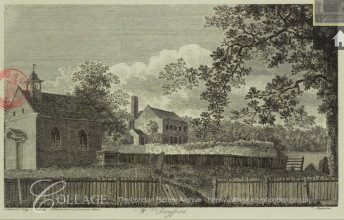 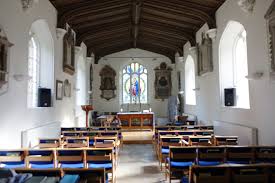 Thomas More made reference to the shrine at Willesden in his Dialogue concerning heresies (1528/9). Later, in An Answer to Thomas More’s Dialogue (1531), the avowedly Protestant William Tyndale (c. 1494–1536) complained of those who endlessly repeat: 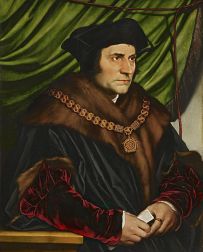 During 1527 the reform-minded priest Thomas Bilney (c.1495–1531) was arraigned for preaching against pilgrimages, even doing so in Willesden church itself in Whitsun week that year.

You do not well to goo on pilgremage to our Lady of Walsinghan, Ipswiche, or Wyllesdon, or to any other place and there to offer for they be nothing but stocke and stones, therefore it were better to tary at home and pray to God there. (Valentine, 11)

Thomas More later stated that the character of his Protestant interlocutor in the Dialogue concerning heresies was actually based on Thomas Bilney.

More’s biographer Thomas Stapleton (1535-98) says that More regularly made pilgrimages on foot to shrines up to seven miles from London, thus encompassing Willesden. One such pilgrimage to Willesden was during the first week of April 1534, with More staying at the home of Giles and Alice Alington just days before his final arrest and eventual execution/martyrdom. (Mitjans, 67)

In recent times a distinctive design of medieval pilgrim badge often found in the London area – although not in Willesden – has been attributed to the shrine of Our Lady of Willesden. (Spencer)

The end came for Our Lady of Willesden in the autumn of 1538 when:

all the notable Images unto the whiche were made anie speciall Pilgrimages and Offerynges were utterly taken awaye as the Images of Walsingham, Ypswiche, Worcester, the ladie of Wilsdon with many other.  (Edward Hall, d. 1547, cited in Valentine, 15)

There is no record of the value of any items associated with the shrine at the time of its demise, nor is there any record of a revival of the Willesden shrine during the Catholic restoration that took place in the brief reign (1553-8) of Queen  Mary Tudor. Even so, as late as 1563, in the Second Book of Homilies, a newly reformed Church of England was still inclined to warn against idolatrous invocations to: our Lady of Walsingham, our Lady of Ipswich, our Lady of Wilsdon and such other. (Valentine, 15)

Today, all that remains to connect the medieval shrine directly with the present day are the prominent modern statue of Our Lady and the chalice of 1517. But who knows what still waits to be discovered in the archives or under the ground?

The church is well worth a visit if you are ever in the area. The building is open during the day (check parish website) and the people are very friendly. And despite its location on a busy main road, as you walk up the little lane to the church entrance with its vast burial ground beyond, it is not hard briefly to forget the gritty urban location. 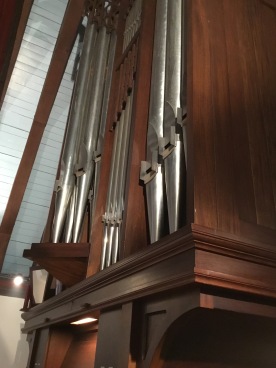 The rather fine pipe-organ is the work of J. W. Walker and Sons, and is a two-manual mechanical-action instrument installed in a newly built west gallery in 1983. One third of the cost of the new instrument was met by a generous donation from John Roberts of Virginia, USA, whose antecedents had once lived in Willesden.